As part of a late 16th century outfit I was working on I wanted to add a leather jerkin.  After spending many hours searching the internet and portrait books at the library I decided on a basic design I would use.  It is loosely based on a number of images but resembles the following two the most.


I did 2 or three mockups using felt to work out the pattern as felt has a stretch and drape similar to the thickness of leather I wanted to use.  This was the final mockup I decided on.  I wanted a LOT of slashing so that the silk suit would show off but I also wanted it to drape well.  I found that the jerkin fit well but looked considerably different once I did all the slashing.  Given my more rotund physique I think it has a shape close to that in the period portraits that I used as inspiration.

Prototype of the skieved edge, button hole and stitching through 5 layers of leather. 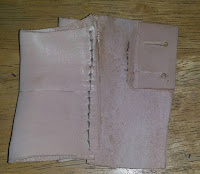 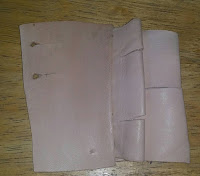 I cut the prototype apart along the stitching. I then transcribed the pattern, making some small modifications, to paper. I added seam allowances and space for some rolled edges. I measured out the lines for the slashing and pattern was set.


Felt mockup cut out and transcribed to paper for a permanent pattern.

Transcribed pattern to the leather and cut out the pieces.

I laid out the goat skins to maximize the use of leather and began cutting. Once cut I taped the pattern pieces on and did the final slashing.
Collar sections cut out.

Back cut out and slashed up... 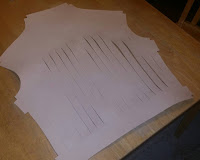 I sandwiched both fronts together and taped the pattern them. I then slashed through all layers to ensure both sides would be symmetrical.

I hand sewed the entire garment.  All seems were skived along the edge.  After the stitching was done I lightly hammered the seam flat and then used a very small amount of glue to hold the seams flat.

Collar pieces being put together before attaching to the body of the jerkin.

Here is what the other side of the seam looked like once the clips were removed and stitching was done.

Here are a couple of the skirting pieces.  I had taped them together to finish the sewing. 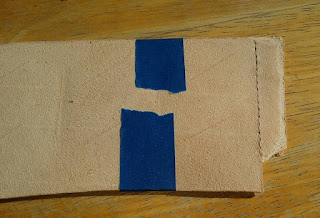 Once fully stitched I hammered, wet slightly and then glued the seam.

Finished seam as seen from the outside.

Stitching on the taps was the most challenging as I had to go through two layers for each tab as well as the jerkin shoulder.  Each stitch had to penetrate 5 layers of leather.  I skived the edges to thin out the stitching area but this was still the toughest portion.

Finished shoulder tabs from the outside. 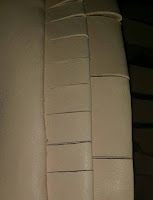 I didn't stitch the button holes.  I simply glued over the flap, punched a hole and used a razor to cut a slit.  The double layers of leather glued together has been strong enough to hold the buttons firmly. 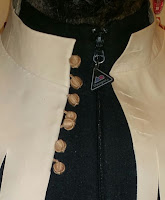 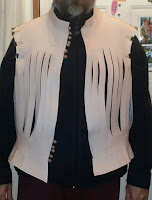 I wasn't sure how I would wear the jerkin.  Some images show a gentleman wearing it buttons undone while other show the buttons fastened to the neck.  Either way I like the way it looks and fits.  The collar had to be loose enough to fit a rough and thick collar underneath.  Fits well. 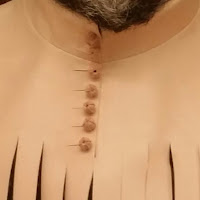 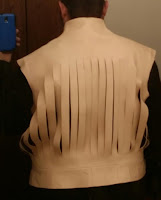 I folded over the edge to hide all the knots and then hammered and glued it up.

Similar assembly for the button on the bottom edge.

Button holes made by folding, hammering, gluing, punching and then slicing the button hole. 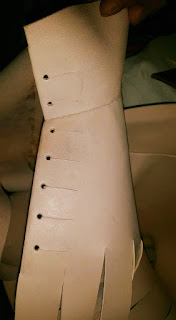 As of today I have not yet applied any oil or stain to the leather.  I will probably oil and/or wax it but I don't plan on dying it.  I really like the light color.  I was afraid to oil it before the event as I wanted to make sure the color didn't change much at all.  Now that the event it was created for has passed I will likely treat the surface with a light coat of oil.

Here are some images of the jerkin being worn with the finished outfit. 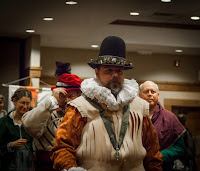 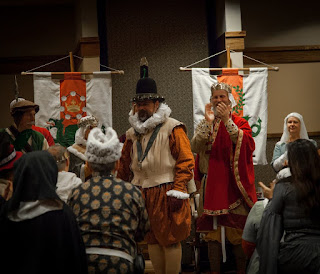